The legendary Oxygène/Equinoxe organ, featuring the world’s most beautiful synth string ensemble: it’s the Eminent 310U! 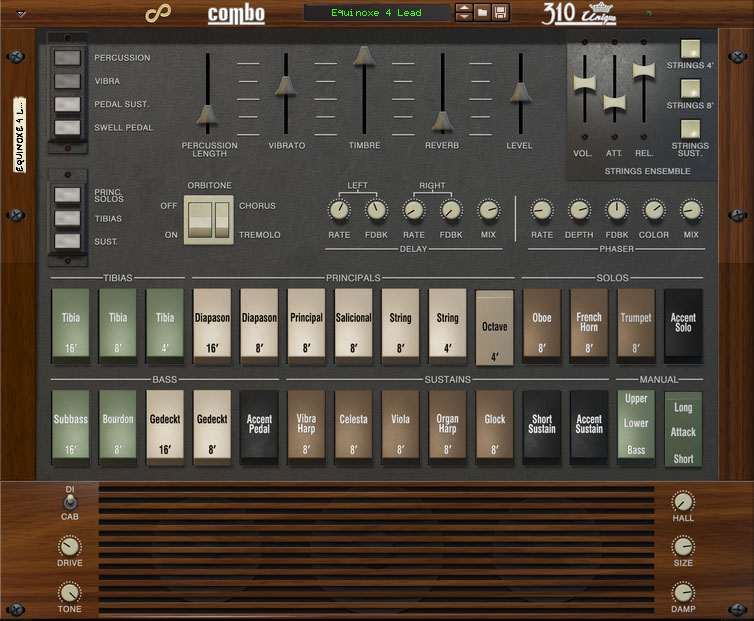 From a Dutch manufacturer of electronic organs, the 310 Unique remains a quite remarkable instrument. Eminent’s home/small church organ, an impressively weighty monster, first appeared in 1972. It featured a selection of conventional pipe-organ style voices—tibias, diapasons, horns etc.—created via analogue circuitry. The organ featured the de rigueur vibrato, but with the benefit of a rather less typical key-delay option, basic low pass filter, a spring reverb tank, and the main tab voices featuring a percussion option, allowing the notes to decay. But what was genuinely unique about the Unique, and which elevated the machine towards the sought-after legendary status, was that it introduced to the world the first commercially available String Ensemble.

The 310U’s original String Ensemble remains the definitive example of the form, surpassing even later dedicated iterations produced by Eminent themselves—and then licensees ARP—in the Solina String Ensemble keyboard. Its rich, three-channel sound, produced by the then new-fangled modulated BBD delay circuits created a lush, warm strings chorus that was arguably unmatched by anything later, and most synth-makers, from the USA to the USSR and everyone in between, tried. Compare, for example, to the later, brighter, smoother Rhapsody ensemble of the X~705, found elsewhere in the Retro Organs 2.0 range.

Three Strings Ensemble selections were possible: the “Strings 8′” and “String 4′” voices had no envelope as such, and are played in a similar fashion to the standard organ voices, with no release decay. The third selection, however, “Strings Sust.”, used an additional set of “Strings 8′” voices with, via the Short Sustain tab, a semi-adjustable release time. All three could be played together, creating a vast strings-scape.

All the regular organ tab voices could be run through either the ensemble circuits, or through an extra set of modulated BBDs, a pseudo-“Leslie” effect that Eminent labelled the “Orbitone”, a two-speed chorus ensemble.

Combined with a delay and a phaser (Small Stone, of course), it is the “architextural” sound of Oxygene and Equinoxe, underpinning both those classic works of electronica with those mesmerizing strings and the percussive organ leads of parts II and IV respectively.

Completing JP’s range of classic “combo” organs, the Combo 310 Unique features a completely new and exclusive set of high quality samples, recorded at 24/96, from JP’s own Eminent 310U organ. JP recorded every note of every Tab (in mono) and all three Strings Ensemble selections (in stereo with long samples) via the organ’s rear-panel Direct output. Also included are stereo miked samples (7 notes per octave for the tab voices, every note for the Strings Ensemble selection) for all tabs and strings from the built-in cabinet speakers. In addition, a “Virtual” set of tabs offers a tonal alternative, using synthesized waveforms.

The 310U is not just for Jarre jamming. It is for life.

In putting together the Combo 310 Unique Organ for Reason, JP has endeavoured to keep it honest to the original behaviour where possible, with only some minor tweaks for usability. Thus the Ensemble Strings 8′ and Strings 4′ remain without an envelope, but the Strings Sust. selection can now be finely adjusted for both Release and Attack with dedicated sliders, rather than using the Short Sustain tab for release decay alone, which now only affects the Sustains voice group. Sample stretching up to C7 allows you to run two 310U’s with only Strings Sust. enabled and transpose one of them up an octave to effectively create a Strings Sust. 4′ alongside the Strings Sust. (8′).

A synced stereo delay, with independently adjustable left and right delay time, and a phaser have been included, plus a deep Hall reverb, for a cathedral-like quality to your organ tones.

For your convenience, and to comply with modern health and safety requirements, none of which were applicable when JP and his roped-in neighbour hoisted the thing up to the first floor, the weight of the organ has been reduced from over 70 kilograms* to a mere 500MB.

Select from one of three sample modes on-the-fly via the UI or Remote™:

The 310U keyboard range is F1–F5, with C0–C1 pedals. For the Combo 310 Unique Organ the top and bottom notes have been stretched to C1 and C7 respectively, to provide greater range, while the pedals have been moved to C-1 to C0, with C0 mapped through to B0 for a near two-octave bass range. Set the Manual tab to “Bass” to transpose the pedal section to the C1 to B2 range of a standard 5-octave controller.

Adam Kinsey
Composer
It´s a great Synth, and it´s really versatile to use for every music genre

Gardinski
Composer
It's a beautiful sounding thing JP. I'll be getting a lot of use from this... and not just hours of noodling 😉

Tincture
Composer
This thing is amazeballs!

(*) The Internet claims it as 70kg. JP does not believe this figure, not one bit of it. /rubs back